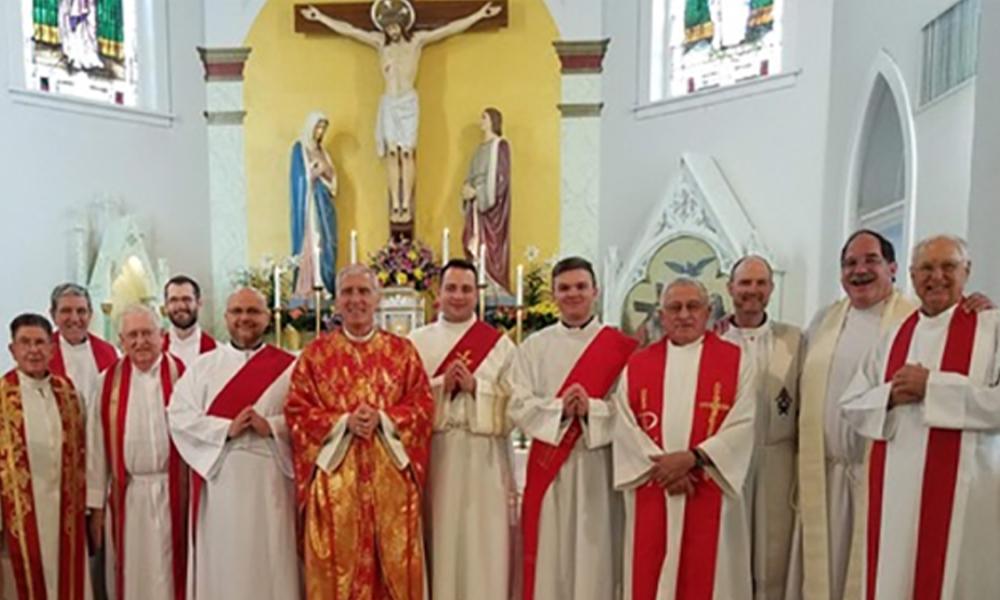 More than 5,000 miles from home! Three seminarians from the Olomouc Archdiocese in the Czech Republic recently flew over two continents and one ocean to spend a fortnight deep in the heart of a strange land — Texas.

Their visit was sponsored by the Czech American Priests Association based in Hallettsville and Father Stephen Nesrsta, pastor of Holy Trinity Parish in Corn Hill. Nesrsta has organized the annual event since its inception in 1999. Although he has served several different parishes in Fayetteville, Ellinger, Temple and Somerville over the last 23 years, Father Nesrsta has continued this devotion to the land his ancestors emigrated from in the 19th century.

Shortly after touching down in Austin, the seminarians — Pavel Fiala, age 27; Frantisek Sarg, age 48; and Lukas Gelnar, age 26 — were treated to some notable Texas landmarks. They visited NASA, Galveston Island, the Alamo, a few missions in San Antonio, and dined on Tex-Mex.

The seminarians said Texans have “big hearts and drive big cars” and drink too many iced beverages. Altogether, the men agreed people here are more open with their faith than folks in their homeland, a country dominated by the Soviet Union for a half-century.

“Because of the Communist regime, we are a bit more closed and afraid to pronounce our faith. Faith is more individual for us. And this is the reason why in the Czech Republic there is not too much openness,” Fiala said. “I think it will change in time. It’s getting better and better.”

After a week sightseeing, the seminarians cooled their heels in Corn Hill. On April 25 Auxiliary Bishop Gary Janak of the Archdiocese of San Antonio celebrated Mass in the century-old church. Afterward at the parish hall, a group of a dozen Czech-American priests, and 25 volunteers from KJT and KJZT, men’s and women’s Catholic Czech organizations, gathered for kolaches, coffee and lively conversation. The group also joined in a roundtable discussion comparing church life in the Czech Republic to that in Texas.

Fiala said he learned English in elementary school. He compared Texans’ enthusiasm for getting things done to a popular athletic shoe ad campaign.

“You do it, just do it. You have more activities. We have it also, but you have it a bit more to meet each other and do something,” he said.

“Especially teaching religion, but also staff in parishes. Only a few of the largest parishes in our country can afford staff,” he said.

The seminarians were also surprised the long distances Texas Catholics drive to celebrate Mass. In the Czech Republic, Catholics usually walk and seldom travel more than a few miles. And although there are more churches in the Czech Republic overall, they often lack repairs.

“Many of our churches are too old and we need to take care of them. They are 200 years, 300 years, 600 years. We have to take care about them. And space near a church is not so big. We can’t afford a meeting center like this (parish hall at Holy Trinity) because we don’t have enough space,” Fiala said.

Father Nesrsta said two to four seminarians from the Czech Republic visit each year for various reasons: to help with their English; to see how the church functions in the U.S. compared to the Czech Republic; and to see firsthand how many Czech immigrants are in Texas. (According to the 2000 U.S. Census, about 188,000 Czech-Americans were living in Texas, the most in any state.)

Father Nesrsta said his ancestors emigrated from the area known today as the Czech Republic in 1870. He believes keeping in touch with our roots is important.

“If it wasn’t for those people who sacrificed so much, we wouldn’t have what we have today. So in a small way, I’m just trying to help them have a broader vision of the world than what they have in their own country. And help them whatever way we can financially. I think the more we relate with other people in other countries, the more we have a different world vision,” Nesrsta said.

“Also, it helps if they have a different image of the people of the United States. All they hear on the news over there is Americans are greedy, they’re selfish, they want everything their way. And when they come here, they experience the complete opposite. Then they tell their people (at their parishes) what they experience,” he said.

After the April 25 gathering, the seminarians were scheduled to help preside at a wedding, tour the Capitol in Austin and visit the historic Czech communities of Shiner, Praha and Hostyn.

All three seminarians’ expenses are paid through private donations. Father Nesrsta said there is no need for fundraisers, raffles or GoFundMe pages.
People on both sides of the Atlantic Ocean who find value in the cultural exchange are happy to give.
The three men are scheduled to be ordained on June 21 in the Archdiocese of Olomouc.

Holy Trinity Parish was founded in 1889 by the ancestors of a few current parishioners from Moravia and Bohemia. The church building’s two formidable spires (112 years old) are an impressive landmark rising up from the crest of a small hill and easily viewed from several miles away. Today, about 240 families from across Central Texas are members. Corn Hill is about 10 miles north of Georgetown.