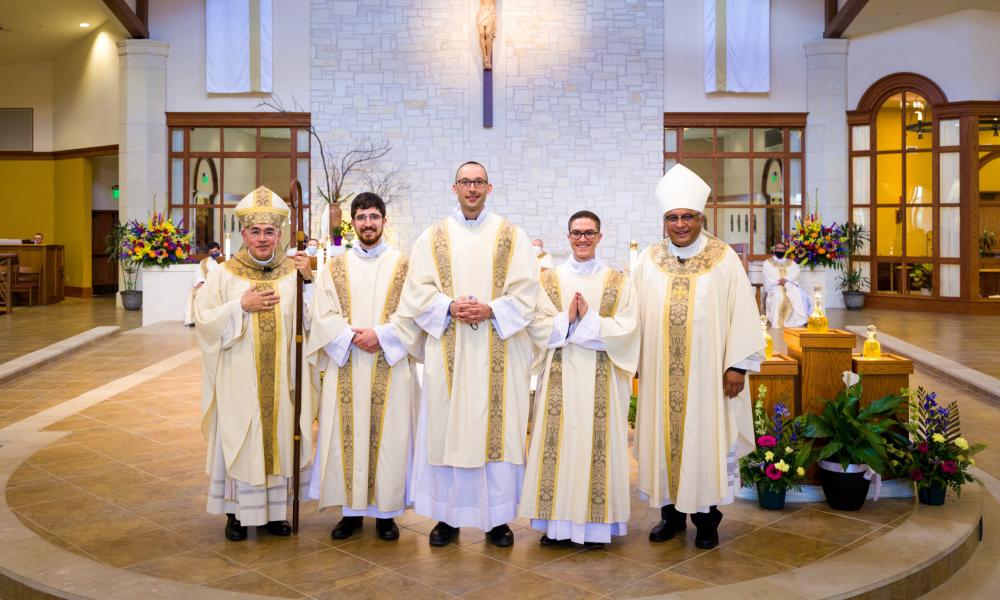 Bishop Vásquez Will Ordain Three to the Priesthood on June 11

With great joy and thanksgiving, Bishop Joe Vásquez will ordain Deacons Samuel Bass, Jakob Hurlimann and Fernando Ricaud to the priesthood June 11 at 10:30 a.m. at St. Vincent de Paul Parish in Austin. The Mass will be livestreamed at austindiocese.org/watch and it will be ASL interpreted.

Deacon Bass was baptized into the Catholic Church after college, and Deacons Hurlimann and Ricaud grew up in families that formed them in the faith. They all expressed appreciation for the support of their families, friends, Bishop Vásquez and those who have helped them along the way.

Deacon Samuel Bass, age 33, is the only child of Stephen Bass and Kristin Turner. He joined the Catholic Church as an adult and considers St. Louis King of France in Austin to be his home parish. That is where he discerned his call to enter the seminary.
Growing up in Austin, Deacon Bass had many interests, including reading, singing, baseball and model trains. After he graduated from McCallum High School, a scholarship led him to Amherst College in Massachusetts, where he studied English and earned a liberal arts degree in 2011.

While away at college, he began to ponder the “bigger questions” of life and search for a sense of belonging. Friendships with Catholics and reading the Gospels led Deacon Bass to explore Catholicism. After graduation, he spent three years working as an apprentice on organic farms. During this time, he participated in the Rite of Christian Initiation of Adults (RCIA) process and was baptized in 2013 at the Easter Vigil.

Several months later, while working in Canada, Deacon Bass sensed that God was calling him to the priesthood or religious life. To discern his future, he moved back to Austin, lived with his parents, and worked as a carpenter’s assistant. He said the guidance and encouragement he received from Father Will Straten, and the diocesan vocation directors, Fathers Brian McMaster and Jonathan Raia, were invaluable.

Helping those in need through home visits with the Society of St. Vincent de Paul influenced his decision to become a parish priest.

“I realized that it is more fulfilling to help others and accompany them in their difficulties than to pursue my own interests. This is part of the identity of a diocesan priest,” Deacon Bass said.

He attended Holy Trinity Seminary in Irving and then the Pontifical North American College in Rome. Deacon Bass appreciates those who brought him to the Catholic faith, and the priests, religious and parishioners who have supported him with prayer and encouragement. He also expressed great love and gratitude for his parents, whose generosity allowed them to be open and adjust their own vision of their son’s future. That process has brought them all closer, he said.

When asked what advice he would give to a man or woman considering the priesthood or religious life, he said, “Don’t be afraid to let Jesus Christ into your life. He wants only your good and has a beautiful plan for you.” He also advised them to pray, seek mentorship with priests and religious and get to know others who are discerning.

Deacon Jakob Hurlimann, 27, is the son of Dan and Emily Hurlimann. He has one younger brother. He grew up in a strong Catholic family, and they were members of St. Vincent de Paul Parish in Austin since its founding.

Starting in kindergarten, Deacon Hurlimann attended Holy Family Catholic School, progressing to St. Dominic Savio Catholic High School, where he ran cross country and track and played the bass clarinet. Also active in Boy Scouts, he developed a great love for hiking and backpacking and earned the rank of Eagle.

Deacon Hurlimann first heard God’s call to the priesthood during his middle school years. Both parents passed on their love of parish ministry to him. He accompanied them in bringing Holy Communion to the sick and homebound and became an altar server and lector. Through attending vocation retreats and discernment dinners, Deacon Hurlimann got to know priests and seminarians personally and saw them as “real people.” He especially admired Bishop Daniel Garcia, then his pastor, and Father Brian McMaster, who was the vocations director while he was in high school.

After graduation, Deacon Hurlimann attended Texas A&M University with a vague direction of entering the seminary sometime in the future. Halfway through the first semester, he participated in the Heart of Jesus Discernment Retreat.

“This made me realize that now was the time for me to enter formation as a seminarian. I told my parents Christmas night 2013. Their support was a great affirmation that I was following the will of God,” Deacon Hurlimann said.

The next fall he began studies at St. Joseph Seminary College in St. Benedict, Louisiana. There, he developed many friendships he hopes will last throughout his life.

“Living in community is always a challenge, yet at the same time, one of the most beautiful things. The men you live with, pray with, and work with have the same goal as you,” he said.

After college seminary, he moved to the Pontifical North American College in Rome. Deacon Hurlimann has enjoyed studying philosophy and theology, and presently, his studies focus on moral theology.

After ordination, Deacon Hurlimann looks forward to celebrating Mass, offering the healing forgiveness of Jesus in the sacrament of reconciliation and teaching classes on a variety of topics.

His advice to anybody considering the priesthood or religious life is to take positive steps. Because the world bombards us with information, something spiritually is happening within a person considering a vocation. Taking positive steps will help the person clarify if this is a true calling.

After his ordination, Father Hurlimann will celebrate a Mass of thanksgiving on June 12 at 9:30 a.m. at St. Vincent de Paul Parish in Austin.

Deacon Fernando Ricaud, age 30, is the son of Fernando and Catalina Ricaud. The oldest of three children, he has a younger brother and sister. Born and raised in Monterrey, Mexico, he grew up in a loving Catholic family, where he was taught the habit of prayer at a young age. For 12 years, he took piano lessons, and today he enjoys playing the piano, reading and watching movies produced by independent filmmakers.

When he was 19, Deacon Ricaud moved to Austin to attend the University of Texas and majored in computer science. He considers the University Catholic Center to be his home parish, as it was both his first parish after moving to the U.S. and where he experienced a spiritual awakening.

Deacon Ricaud first considered the priesthood during his senior year in college. Two of his best friends, also from Monterrey and studying at the university, surprised him with the news that they were entering the seminary. This caused him to reflect on the question of how open he was to following God’s will.
From that day forward, Deacon Ricaud prayed, “Lord, make me want what you want. If you want me to be a priest, give me the desire to be a priest.”
After graduation, he took a job in Chicago as a software engineer with a company that developed map technology for self-driving cars. On the feast of Our Lady of Guadalupe, Dec. 12, 2014, Deacon Ricaud was ill, bored and snowbound. This time of isolation was actually a great blessing and gave him the courage to discern his true calling.

Following advice from a discernment video by Bishop Robert Barron, Deacon Ricaud prayerfully imagined himself as a priest, celebrating Mass and hearing confessions. This mental image and an honest look within his heart brought him peace and joy.

“When I looked past my fears and doubts, my desire to follow Jesus as a priest became stronger than my desire for marriage,” he said.

In the summer of 2015, Deacon Ricaud quit his job and returned to Texas to become a seminarian for the Diocese of Austin. He attended Holy Trinity Seminary in Irving, and then St. Mary’s Seminary in Houston.

For Deacon Ricaud, the challenge of formation was to balance the introspection needed to explore his personal weaknesses and the temptation toward perfectionism. The examples of the saints served as a reminder that God loves us in our imperfections, and we always have the hope of his mercy.

For those who want to discern whether God is calling them to the priesthood or religious life, Deacon Ricaud advises, “Ask the Lord, through Mary’s intercession, to place in your heart the desire for his will. If you pray this sincerely and faithfully, you might be surprised by the transformation your heart will undergo!”

After his ordination, Father Ricaud will celebrate Masses of thanksgiving June 12 at 11:30 a.m. at St. Elizabeth Parish in Pflugerville, June 19 at 10:30 a.m. at the University Catholic Center in Austin and June 25 at 6 p.m. at St. Joseph Parish in Bryan.