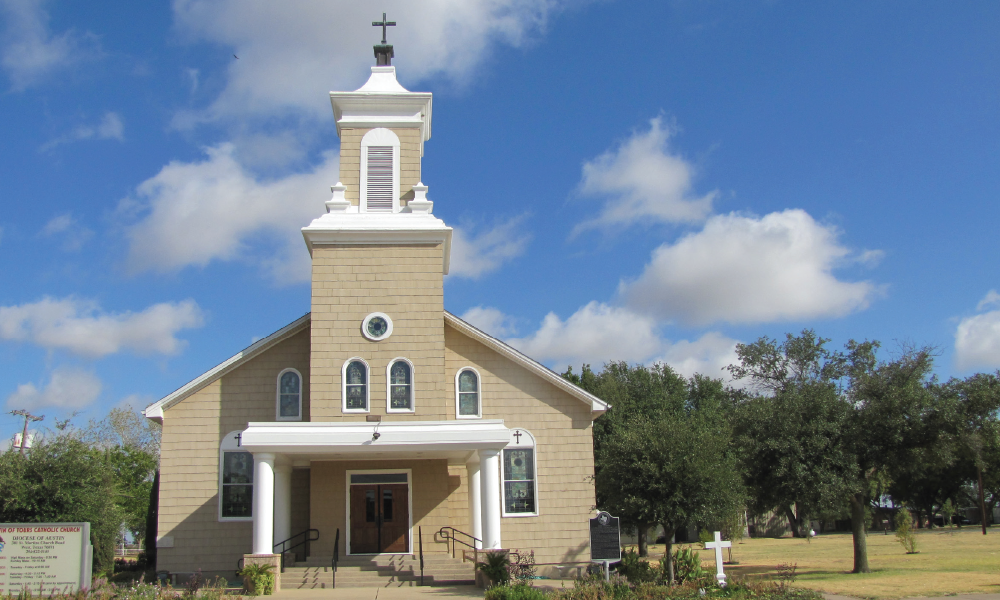 The Community of Tours Celebrates 150 Years of Faith, Generosity

Catholics have practiced their faith in northeastern McClennan County for 150 years in the small community known as Tours. In 1872, the area around present-day Tours opened up for colonization, and the following year, on Nov. 11, 1873, settlers arrived from Illinois to take up residence. Within a year, the German, Irish and other European Catholics had built a church named St. Martin in honor of the fourth-century saint whose feast day fell on the date the first settlers arrived in the area.

The parish community commemorated this historic event with Mass celebrated by Bishop Joe Vásquez. Following the Mass, the parish hosted its annual picnic, which included a cornhole tournament and fun and games for all ages. Parish volunteers, led by Joyce Marek, also organized a temporary museum that included exhibits of various aspects of parish history, which were on display throughout the day.

A long line of faith

Father Walter Dhanwar said the offspring of these initial homesteaders are still the heart and soul of the parish, and their progeny will keep it a vibrant faith community for years to come.

These hardy pioneers were devoted Catholics. Even before building a church, between visits by priests, John Jupe read the Gospel and epistles on Sundays to his neighbors and led the rosary. Not surprisingly, the parish families have nurtured 21 religious sisters. The most recent woman to enter consecrated life is Jersey Podsednik. She is currently a novice with the Dominican Sisters of Mary, Mother of the Eucharist. She is in her third year and will take her first vows in the summer of 2023.

Father J. L. Bussant, the pastor at Assumption Church (later St. Mary Parish) in Waco, was the first priest to greet the new arrivals and celebrated Mass for the first three years of the congregation’s existence. He was also instrumental in building the first church. Missionary Father Edward Feury tended to St. Martin for eight years, visiting twice monthly.

While lay teachers had operated a school as early as 1874, the Sisters of Divine Providence from Our Lady of the Lake in San Antonio staffed the newly built school, beginning in 1890. In 1940 the parish agreed to allow the local school district to operate the school, with the sisters continuing as teachers. Then in 1960, the school became a public school. The parish converted the classroom building for use as a day-care center.

Down the road from the church is the historic St. Martin of Tours Cemetery on land donated by the John Deiterman family in 1874. Another notable feature of St. Martin of Tours is a Shrine to Our Lady of Fatima located behind the church. The shrine, dedicated on Nov. 11, 1948, under the guidance of Father John Gleisner, was the idea of veterans from both world wars. In addition, St. Martin built a parish hall in 1957 and constructed a community hall in 1966 adjacent to the parish hall.

Father Dhanwar said since his arrival six years ago, the parish community has come together to make much-needed improvements.

“When I came here, there had been no repairs, work or maintenance on the facilities for 30 to 50 years,” Father Dhanwar said. The improvements included painting and repairing the tower, entrance and windows (shattered by the explosion in West in 2013). In addition, the parish restored the damaged Community Hall. He is grateful for the pride and commitment parishioners exhibit to maintain the historical campus.

“More than that,” Father Dhanwar added, “is the spiritual life has also been strengthened.”