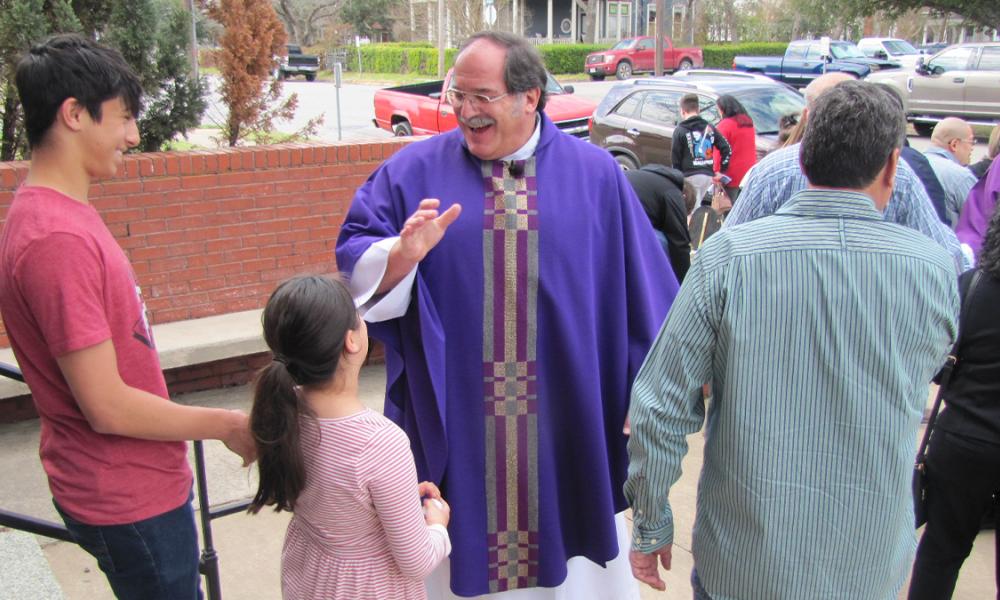 Father Ed Karasek of St. Mary of the Visitation Parish in Lockhart credits his parishioners and staff for the “best Religious Leader in Caldwell County” award he recently received. “There is no I in team,” Father Karasek said of the recognition made by readers of the “Lockhart Post-Register.”

Since St. Mary’s also received recognition as the “Best Church in Caldwell County,” the pastor must be on to something. He said it is a big church and getting bigger, so they had the numbers to make a difference in the newspaper’s contest. Still, having the numbers does not always translate to a winning vote.

“Father Ed does what he needs to do to be a good shepherd. He never says no to anyone,” parishioner Maria Diaz said. “He is a very good person and has a good relationship with people. We all feel his love. He makes everyone feel welcomed in the church.”

Diaz, a member of the parish council and the St. Vincent de Paul Conference, said Father Karasek always asks for feedback from parishioners. “He tells us ‘this is your place, and you need to participate,’” Diaz said.

Parishioner Pete Donahoe credits Father Karasek’s visibility within the county, especially in Lockhart, as a reason for winning the award. Donahoe added that Father Karasek has a likable attitude and enjoyable personality.

Father Karasek was born in 1961 in Caldwell, and his home parish was Holy Rosary in Frenstat. On May 30, 1987, Bishop John E. McCarthy ordained the 26-year-old a priest for the Diocese of Austin and assigned him as associate pastor of St. Louis Parish in Austin. Two years later, Bishop McCarthy appointed Father Karasek as administrator at St. Mary of the Assumption Parish in West. He served for 27 years under three bishops. Then, on Jan. 1, 2014, Bishop Joe Vásquez named Father Karasek as pastor of St. Mary of the Visitation in Lockhart. He has served there for the last seven years.

In addition to his service at these parishes over the last 35 years, Father Karasek has managed other leadership positions in the Diocese of Austin. He served as dean of the Waco Deanery for eight years; member of the Presbyteral Council; Spiritual Adviser to the Southern Council of Austin Diocesan Council for Catholic Women; elected member of the Priest Personnel Board; member of the College of Consultors; and dean of the Bastrop/Lockhart Deanery.

Perhaps his most unforgettable time as a priest was in 2013 when 15 residents of West lost their lives in an ammonium nitrate explosion. Many were parishioners at St. Mary of the Assumption under Father Karasek’s care. A week later, he told a reporter that he and parishioners would “work through the grief.”

“It is good for people to be together,” Father Karasek said at the time. He added that “they’ll laugh and cry, they’ll update each other on the injuries and rebuilding efforts, and they’ll mourn.” He, too, would grieve the loss. He concluded the interview by saying, “We have got to live for today. That’s what I have been telling people. Say those thank yous and I love yous. Say them today.”

This experience in West has served him well during the COVID-19 pandemic. The pandemic did not come in such a sudden and dramatic manner as the West explosion. However, Father Karasek has overseen more funerals related to the pandemic than he did in West. In 2020-2021 Father Karasek presided over 48 funerals directly attributed to COVID.

“People are persevering, staying strong in their faith,” Father Karasek said. “God is going to take care of us. He is the good shepherd. He is the pastor.”

Despite the challenges presented by the pandemic, people have been generous. Since Father Karasek’s arrival they have reconditioned pews, bought a new sound system, purchased a new air conditioner, repaved the parking area and acquired an organ. The Knights of Columbus are donating money for stained glass windows, which will be installed next.

Father Karasek is proud the parishioners continue to work together as a team.

“Sometimes I feel like a coach or orchestra leader, you come in and kind of direct people,” he said. “You try to see the talents in them and get them to use them.”

New parishioners are coming to St. Mary Parish every Sunday as Lockhart continues to grow. Father Karasek wants people to feel welcomed. He wants them to know their pastor is approachable and that they can sit down together and have some of Lockhart’s famous barbecue.