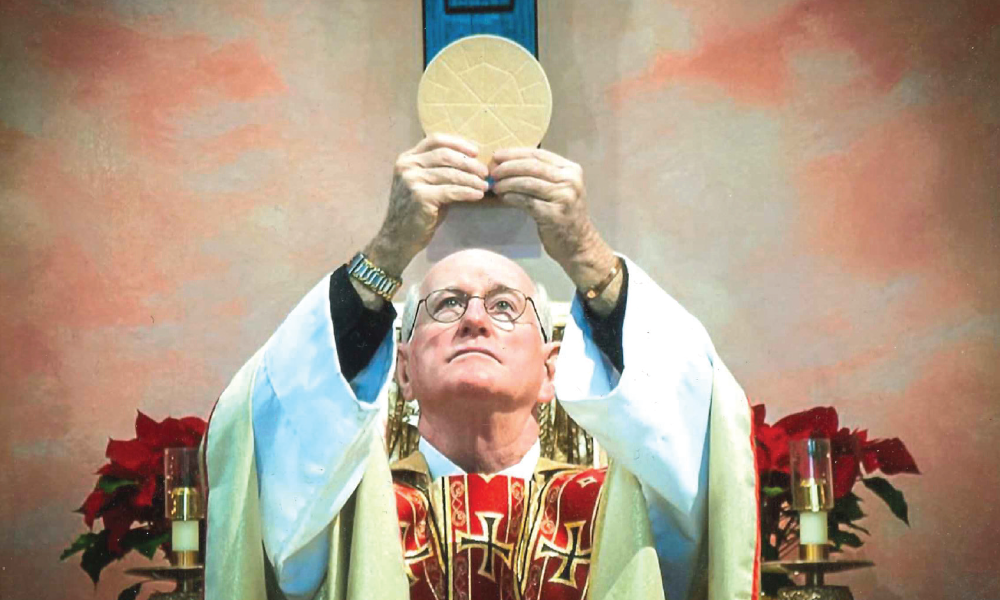 Although Father Jim Olnhausen is retired, his dedication and generosity to the church have shown no signs of slowing down.

“I resigned from the office of pastor,” he said. “I didn’t resign from the priesthood.”

Since he officially retired in July 2016 as pastor of St. Margaret Parish in Giddings and its mission, St. Mary in Pin Oak, Father Olnhausen has continued to help at parishes. At Ascension Parish in Bastrop, where he now resides, he celebrates Mass two weekends a month, as well as daily Mass every morning.

“I really enjoy preaching to the 40 or 50 people who come for daily Mass,” he said. “We’ve grown a lot together in the last six years.”

The parish is grateful he has remained active in ministry. Father Ramiro Tarazona, pastor of Ascension Parish, said Father Olnhausen is much loved.

“His homilies are quite often history lessons about our church, our saints, our rituals and the why we do what we do in celebrating Mass,” he said.

Originally from Pensacola, Florida, Father Olnhausen first felt called to monastic life while a high school boarding student at St. Bernard Preparatory High School, which was established by Benedictine monks the same year as their abbey in Cullman, Alabama.

“My first real desire was to be a monastic priest and then God changed things and moved me toward diocesan priesthood,” Father Olnhausen said. “I was drawn to them because of their prayer life, their spirituality and their mission of teaching. At that time, I didn’t realize that would be fulfilled in parishes.”

He entered Conception Abbey in northern Missouri as an “independent seminarian,” meaning he was sponsoring himself instead of a diocese sponsoring him. But this unusual situation for a U.S. seminarian ended the summer after his sophomore year, when he traveled to the Diocese of Austin to work for Catholic Charities. He met three priests — Msgrs. Victor Goertz, Edward Jordan and Donald Chatham — who encouraged and inspired him to become a seminarian for the diocese.

After two more years of theology studies at Conception Abbey, Bishop Louis Reicher transferred him to Notre Dame Seminary in New Orleans. Father Olnhausen was ordained a priest for the Diocese of Austin on Jan. 24, 1970.

His first assignment was at St. Mary Parish and Our Lady of Guadalupe Parish in Taylor. Father Olnhausen has “many happy memories” of serving under — and learning from — the pastor, Father Desmond Murphy.

“It was a wonderful six years at both parishes,” he said. “It was important to see how another man with a lot of wisdom made decisions, went to develop leadership and engaged me to help him do those things during those six years. We would talk everything over together. He would make the decisions, but I had a lot of input. I never felt like I didn’t have a say.”

Not only did he learn the ins and outs of being a pastor during that time, but Father Murphy also taught him the importance of tithing. Father Olnhausen has carried those lessons forward ever since.

“One of the main reasons why I have been generous is because that first pastor really challenged me to tithe,” he said. “He broke it down for me and told me exactly what I should be giving. And it was based on 10 percent — 5 percent to the parish and 5 percent to the charities of my choice.”

Father Murphy also stressed to his then-associate pastor that as his salary increased, his giving should increase as well, and that monetary gifts were not excepted from tithing.

Over the years, Father Olnhausen has chosen to split that second 5 percent among charitable organizations, diocesan capital campaigns and the Catholic Services Appeal (CSA). The CSA has been a steady beneficiary of his generosity because during his many years as an active priest of the diocese, he felt a responsibility to the yearly effort to support the mission and ministries of the local church — the Diocese of Austin.

In this year’s CSA video, Father Olnhausen talks about how the Eucharist has greatly enhanced his life throughout his 52 years of priesthood, and how the CSA has supported him throughout those years as well.

The diocese is grateful for retired priests like Father Olnhausen for the generosity they show to communities during their senior years.

“Father Jim is always kind and generous with his time,” said Scott Whitaker, director of stewardship and development for the diocese. “When he was a pastor, he always made time for you and was welcoming and hospitable. Even in retirement, he continues to do that.”

Although he anticipates one day moving to the St. John Paul II Residence for Priests in Georgetown and joining the community of retired priests there, the time has yet to come.

As long as he is able, Father Olnhausen plans to continue helping out in parishes with Masses and confessions so priests may take vacations or need time away from their parishes. He will also still give missions, talks and retreats and accept appointments at Ascension Parish.

Those appointments allow him to continue to interact with parishioners, who seek his advice on a number of issues.

“It’s really a constant experience of life, which I enjoy,” he said. “Priests are surrounded by love and family — that’s what my experience has been. It’s been a wonderful, wonderful ride …” 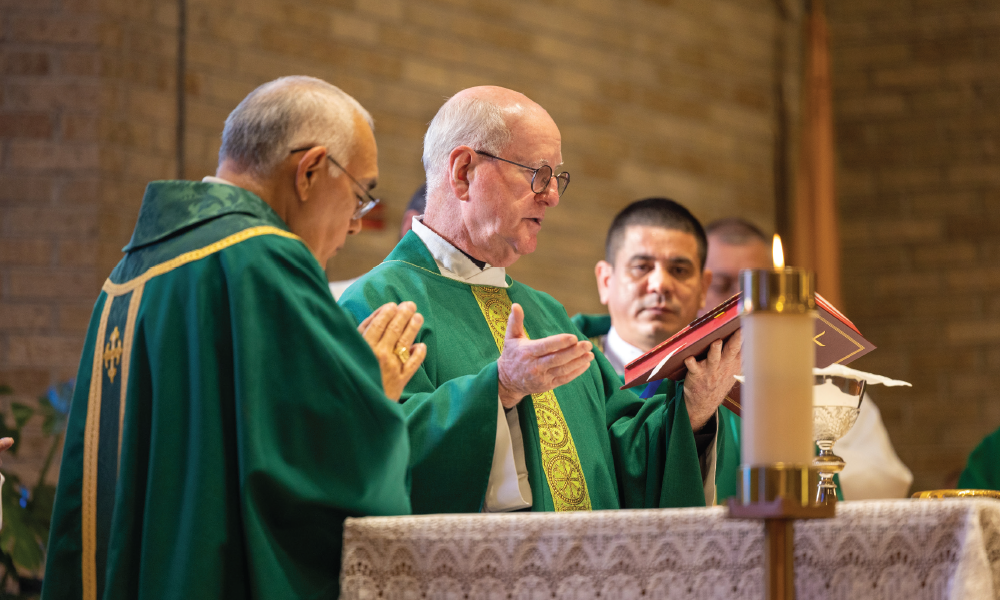