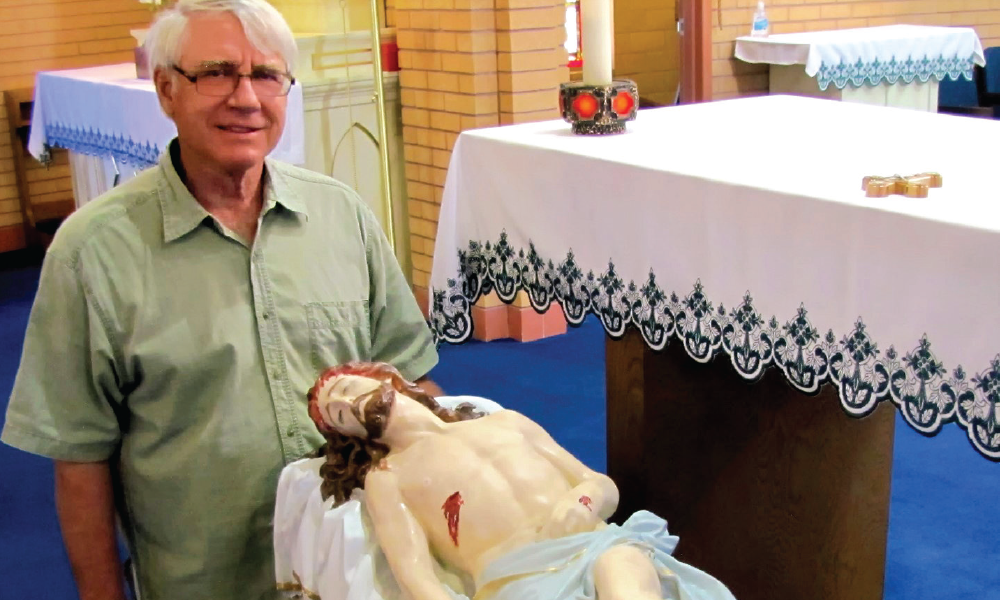 Forgotten Statue Gets a Facelift in Frenstat

In the 14th Station of the Cross, Jesus is laid in the tomb. Artists have captured the death of the world’s savior in many forms. Perhaps the best known is Michelangelo’s Pietà, in which the master depicts the Blessed Virgin Mary holding her son’s body before burial. Other depictions show Christ lying in repose in an otherwise empty tomb. It is a statue of this scene that parishioners at Holy Rosary Mission in Frenstat found in a long-forgotten storage space.

Last January, 9-year-old Blaine Dudensing, the parish’s youngest hospitality minister in training, showed no self-interest — only innocence — when he noticed a “dead Jesus” statue beneath the air-conditioning duct. He quickly shared his find with adults, who got on their knees with faces on the floor to see what the third grader had noticed.

The find prompted parishioners to investigate the statue’s origin. This exploration naturally led to a review of the church’s long history. Holy Rosary, formally named Our Lady of the Holy Rosary, is the oldest Catholic church in Burleson County. A group of settlers from Frenstat, Moravia, settled there in 1884 and founded the church with 40 families in 1886.

At that time, it was a part of the Diocese of Galveston. They began meeting at homes, then erected a school that served as a chapel. In 1889, they built a church. In 1947, Holy Rosary became part of the new Diocese of Austin and was assigned to the care of St. Mary, Our Lady of Lourdes Parish in Caldwell. In 1963, the present church was built.

Only a couple of long-time parishioners vaguely remember the Jesus statue in repose. The two served as altar boys at the old church 60-plus years ago and recalled the “Crucified Christ” statue displayed during Easter.

After retrieving the statue, it was evident that it would need restoration of a broken hand and foot. Fortunately, parishioner Richard Pivonka had the requisite skills. A descendant of one of the founding families, Pivonka had recently retired and returned to Frenstat.

“I have always been good at woodworking, mechanics, welding, kind of a fix-it-all guy, like my dad. Art has been something I was pretty good at, and always wanted to spend some time developing, just never did,” Pivonka said.

After prayerfully considering what he needed to repair the statue, he set out to do it. He also repainted it and built a wooden box to display the figure in the church. In years to come, the church will show Jesus in repose during Holy Week in keeping with the old tradition.

When Father Melvin Dornak, pastor of Holy Rosary, learned that Pivonka had the skills to repair statues, he asked him to use his newfound skills to mend several other figures in the church. For example, the “Last Supper” on the altar had dislodged from its resting place. As a result, several apostles’ faces needed mending. Pivonka fixed them and secured the artwork to the altar.

Father Dornak says the community of Holy Rosary is vibrant, spiritual and generous. Since his arrival three years ago, the parish has grown to 85 families. Nearly 20 students participate in religious education classes. Seven ministries are active at Holy Rosary, including the Altar Rosary Society, KJT, Diocesan Council of Catholic Women, Bible Study, Knights of Columbus (together with St. Mary), Our Lady of Lourdes Bereavement Committee and Pro-Life.

In recent years, Holy Rosary has undertaken several improvements, including a handrail to the tabernacle, new roofing, repaving the parking lot, renovating the vestry and improving the office with a guest room and amenities such as a refrigerator and microwave. In addition, plans call for constructing a Veterans Memorial at Holy Rosary Cemetery later this year and modifying the parish hall.

Father Dornak anticipates Holy Rosary being used for retreats more often, “so we are updating and renovating our spaces and accommodations.” Holy Rosary parishioners also assisted in baking kolaches for the Diocese of Austin’s 75th anniversary celebration last November.

Holy Rosary is “a strong and faith-enduring parish community” dedicated “to its mission to grow in faith and build the kingdom,” Father Dornak said.