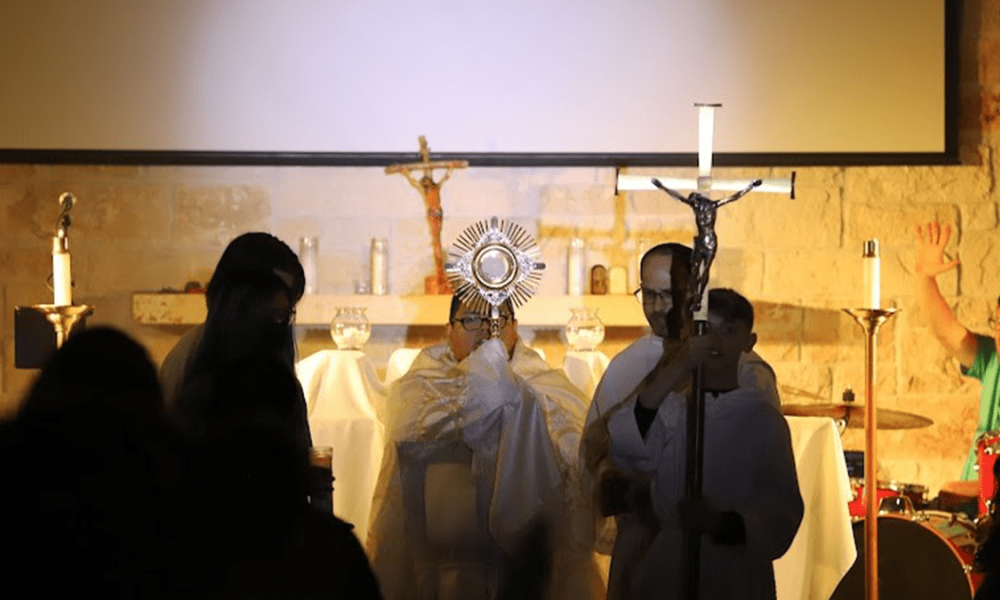 The Easter Octave ended with a bang for the nearly 200 youth who attended Godstock at Eagle’s Wings Retreat Center in Burnet. In a time where parishes and ministries are struggling to return to pre-pandemic numbers, the Godstock team knew it would be a vital investment to keep this festival that celebrates young people and their love for God.

“I really needed this because I was drifting from God, and this was my call back home!” said one teenager.
Godstock is an event that echoes the heart of the church which believes that young people are worth investing in and they are worth celebrating.
Godstock showcases the gifts of young people, their culture and their love of God. It inspires hope, lives joy and simply rocks!

This year’s event took a bit of a SXSW approach featuring performances that were not exclusively musical. The day began with youth from various parts of our diocese arriving and building community. The theme Proclaim! was unpacked through a lively debate on whether there are more doors or wheels in the world, a hot and humorous topic on tiktok this spring.

As the emcee for the event, I encouraged the teens to share their faith.

“Proclaiming is part of who we are,” I said. “We are called not to proclaim a what, but a who.” The day continued to return to this theme and youth were empowered to share their faith, not just receive it.
Next up was the band Sunday Best, a band formed of UT college students who are parishioners of the University Catholic Center. The whole room clapped along to their cover of “Honey in the Rock” by Brandon Lake.

After lunch, the non-musical performer took the stage. Giancarlo Bernini used magic to deliver a powerful message about the difference between illusion and reality. The teenagers were baffled and amazed by his performance and moved by the message that a sacramental life is no trick or illusion but rather the most amazing way to live.

During the afternoon, the youth explored the grounds of the retreat center, built community on the ropes course, made rosaries and participated in various prayer experiences and the sacrament of reconciliation. I headed to the sports pavilion and ended up attempting to play basketball with a number of youth. They showcased the virtue of patience as I missed shot after shot – my knees still hurt as I write this article.

At 5 p.m. we gathered for Mass celebrated by Father Greg Gerhart, the director of Vocations for the Diocese of Austin. After dinner, ToLoveAndRescue, a dynamic rock band, took the stage.

Chairs were cleared out and teens rushed in as Jeremy Rodriguez and the band filled the room with their uplifting music. Familiar covers had the whole room singing along as lights, sound and media made the performance completely immersive.
Then the words “please kneel” were spoken softly into the microphone and the room of 200 people dropped to the floor as Father Henry Cuellar processed in with Our Lord in the Monstrance for Eucharistic adoration. On a Saturday night, in Burnet, a room filled with teenagers adored Jesus.

This was a prayerful sign of hope in a world that moves too fast to acknowledge the great capacity of prayer that this generation holds. Hearts were both lifted and restored as the line for confession grew during this time of prayerful transformation.

“My favorite part of Godstock was adoration. It was nice to see kids my age feel and worship God as much as I do!” one teenager said.

The event concluded with a celebratory song by ToLoveAndRescue where the joy of God’s love led the young people to rush the stage one last time before they loaded up and headed home to proclaim the love they encountered and await for the Godstock 2023, which is set for April 15.

Godstock is a reminder that the church is alive because the young church is alive. This unique celebration of young people should redouble our efforts to celebrate young people, alive in Christ, in every parish, school and family throughout our wonderful diocese.