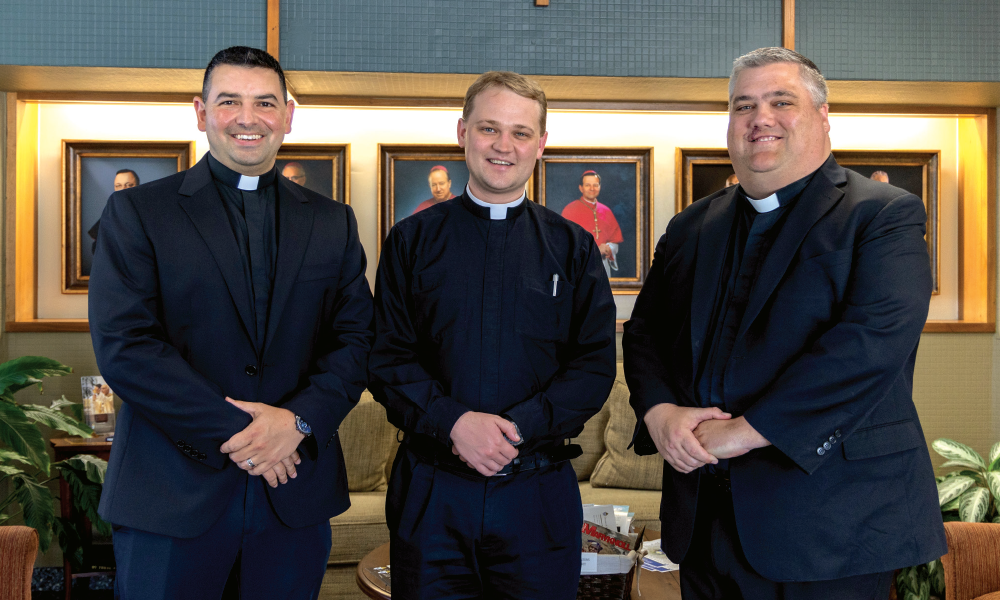 This year, three priests of the Diocese of Austin completed advanced study in canon law and have started new ministries with the diocesan Tribunal.

“Many of our priest canonists and lay judges had reached retirement age over the last few years,” noted Father Chris Ferrer, a canon lawyer who serves as the diocese’s judicial vicar and oversees the diocesan Office of Canonical & Tribunal Services. “We are very fortunate that Bishop Vásquez sent such talented priests for further studies to assist with the church’s ministry of justice.”

Every diocese has a Tribunal staffed by canon lawyers appointed by the bishop to handle serious issues of church law such as marriage annulments and clergy discipline. Father Ferrer explained that dioceses normally have at least three judges hear every marriage nullity case, assigning single judges to cases only when there is a shortage of staff or other similar difficulties.

“Because of retiring staff, we had to put a pause on assigning three judges to cases, but now we can resume giving the level of care that Pope Francis wants us to give to each case,” he said.

Father Doug Jeffers and Father Tom Reitmeyer earned the licentiate of canon law from The Catholic University of America, with Father Jeffers finishing at the beginning of January and Father Reitmeyer finishing at the end of July. Their program included virtual lectures during the school year along with intensive in-person summer sessions, which allowed them to continue serving in pastoral roles in the diocese while completing their studies. Father Zack Rodriguez, who was ordained in 2021, earned his licentiate from the Pontifical Gregorian University in Rome.

While also serving as associate pastor of St. Mary Cathedral, Father Jeffers served for a few months as a defender of the bond and now serves as the adjutant judicial vicar, helping Father Ferrer full-time with the administration of the Tribunal. Father Reitmeyer has joined the Tribunal as a judge while continuing his responsibilities as pastor of St. Vincent de Paul Parish Austin. Father Rodriguez now serves the Tribunal as a defender of the bond, a canon lawyer responsible for defending the validity of marriages in annulment trials. He also serves as associate pastor of St. Louis King of France Parish in Austin.

“I am grateful for these priests who were willing to make sacrifices in order to study canon law. Now that they have completed their degrees, their expertise will be a blessing to the Diocese of Austin,” he said.

Another important distinction to make is that all three new canonists are bilingual in English and Spanish.

“With this new group of priests earning degrees in canon law, we now have enough Spanish-speaking personnel to have a complete Tribunal in both English and Spanish,” Father Ferrer said. The Austin Tribunal has for many years offered the ability for Spanish speakers involved in nullity cases to submit testimony and documents without having to use the services of a translator or interpreter, which if needed can slow down the pace of proceedings.

“As I was the only bilingual judge until recently, we were only sometimes able to have a full complement of judges, and then only in English cases. Now that we have Fathers Jeffers, Reitmeyer and Rodriguez, we can offer this level of care to all the persons approaching the Tribunal, regardless of whether their primary language is English or Spanish.”

Paul Madrid is a defender of the bond for the Diocese of Austin and also serves as the director of the diocesan Tribunal. He is a secular attorney, having graduated from the University of Texas School of Law in 2009, and will soon complete a licentiate in canon law from St. Paul's University.