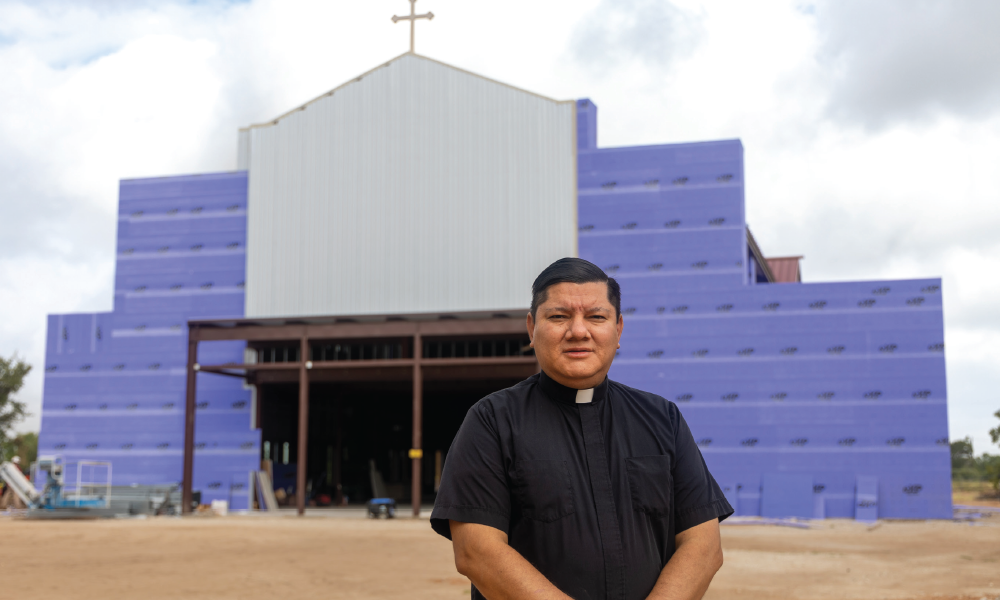 Forty years after Catholics at Hornsby Bend in far eastern Austin began celebrating Mass at the home of Candelaria Gonzales, they are building a new church to take care of the needs of a constantly growing parish. The new structure at Santa Barbara Parish, with a seating capacity of 700, will replace the current church, which accommodates only 300.

Father Froy Jerez, the pastor of Santa Barbara, said the need for a larger space is “because this area is growing, and we have more parishioners than when we started, and the old church cannot accommodate the numbers that we have.” The parish has grown to slightly more than 1,000 families. The increase of parishioners requires the parish to celebrate five Sunday Masses, including a vigil Mass on Saturday evening.

Founded in 1832, Hornsby Bend is the oldest settlement in Travis County. While Catholics no doubt made their home in the early community, they were not enough to organize a church. It was not until 100 years later, in the 1940s, that missionary priests began to visit the area to catechize. Meeting in local homes, people got together to pray the rosary and share the catechism. Then, when they could encourage a priest to visit, they celebrated Mass in neighborhood homes.

Later, in 1982, Guadalupe Martinez began to go to Austin to recruit priests to come to her mother’s home to celebrate Mass regularly. On her visits to Austin, Martinez made it a point to stop and visit Bishop John McCarthy and urge him to build a church in her community. Soon those attending Mass at Candelaria Gonzales’ home were too many, so they moved their temporary chapel to Joe Arrellano’s three-stall open-air garage.

In the summer of 1990, Bishop McCarthy accepted the invitation to celebrate Mass at the auto repair shop. He brought along two old friends from Houston, Neil and Barbara Hanson. The people’s devotion to their primitive worship space moved the Hansons to donate a house on six acres located in Hornsby Bend for use as a church. In 1996, the community built its first church with seating for 150. Two years later, they purchased an additional five acres, and the Hansons deeded them an extra 14. The growth continued unabated.

Today, 99 percent of the parishioners are Spanish speakers, and the priest celebrates all but one Sunday Mass in Spanish. The English Mass is the only Mass that can accommodate the current 300-seat capacity.

“We need more seats to accommodate more parishioners at the Masses in Spanish,” Father Jerez said. “We tried to meet those needs, and we asked permission from Bishop Joe to demolish the wall that separated the old church from the parish hall, and even doing that, we can accommodate just 300 parishioners.”

Diocesan Director of Construction and Planning Patrick Baker said the new church at Hornsby Bend would cost $4.85 million, with the diocese contributing $2.6 million and the parish $2.25 million. The diocesan contribution will go to structures, while Santa Barbara provides the land and liturgical furnishings in addition to construction.

Through the years, Santa Barbara — located at 13713 FM 969, one mile east of Texas 130 — has accumulated some 25 acres of land, so it has plenty of space for the new sanctuary at its present location. In addition, the church will have room to expand to 400 additional seats, 200 on each side of the main chapel.

“The parish will raise the money to pay for furnishings and windows,” Baker said. “The church will open without stained glass, but it is built in such a manner that the stained glass can be added.”

The COVID-19 pandemic hurt the parish’s early fundraising efforts, Father Jerez said. Most Santa Barbara parishioners are not accustomed to making online contributions; therefore, the parish invited parishioners to drop off their donations at the parish office. Under the current inflationary economy, parishioners are also facing difficulties, yet they are doing their best to fulfill their commitments.

“All our parishioners and every ministry are engaged and committed to supporting this project,” Father Jerez said. “I received special support from our parish Finance Council and Ministry Leadership Team.”

To keep costs low, CasaBella Architects designed all three churches in the Eastern Ring Project, and the Navcon Group is building them on a rolling start under a single contract. While the floor plan is identical for all three churches, the façade of each church is unique.

At Santa Barbara, the steel structure is almost complete, the roof and side walls are under construction and the parking is complete. Bishop Vásquez is expected to dedicate the new church at the end of this coming February.