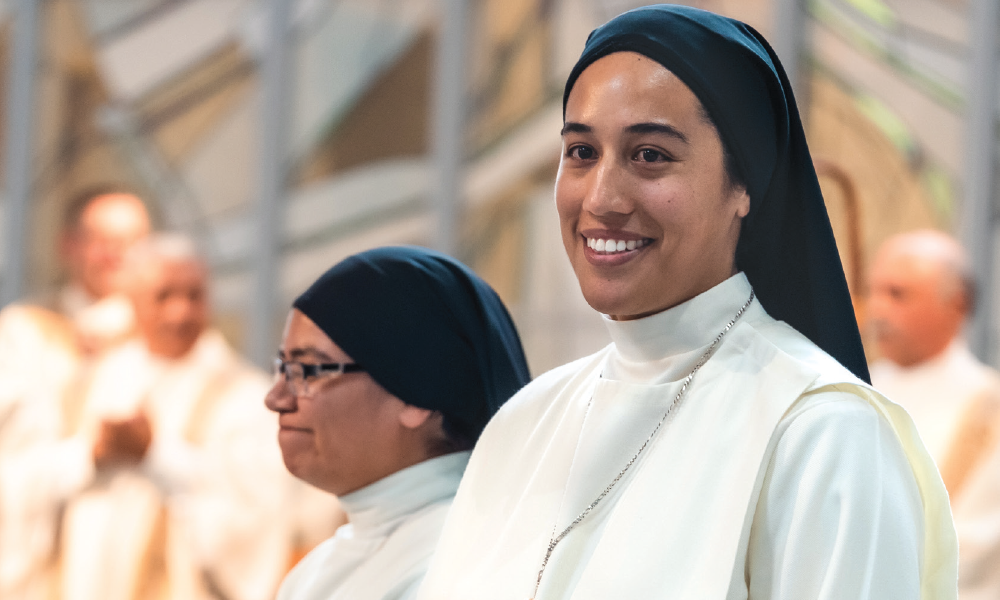 Sister Lucero Espitia of the Discípulas de Jesús has endured many trials in her life — an exacting handball schedule, a spinal surgery and chronic pain and the sorrow of rejection from a religious order she adored. But through it all, God has led her to a vocation she loves. On Aug. 15, at St. Albert the Great Parish in Austin, Sister Lucero Espitia professed her perpetual vows as a Discípula de Jesús.

“Being a Discípula is a gift,” she said.

As a teenager in Mexico, Lucero Espitia spent many hours every week playing handball. Evenings late into the night, and even vacation days, were spent at a prestigious sports complex with a large gym and sports fields. Rising through the ranks and eventually being invited to join the Mexican national handball team (although she did not join), Espitia had all the external markers of success. But something changed. Handball went “from something important to something that I realized had no meaning,” she said. “It didn’t transcend anything. It wasn’t going to bring me to heaven.”

God planted seeds before she even knew she was being called to religious life. Her family regularly attended Mass — “and not just Mass but also groups of the charismatic revival in Mexico,” she added. At 15, she attended a charismatic retreat hosted by the Discípulas de Jesús. They even gave her a pamphlet about their order, but she wasn’t interested in religious life at the time.

A year later, at another charismatic retreat, Sister Espitia felt called to pursue a charismatic religious life. She contacted an order she admired, but she was unable to enter at that time, so she waited.

Sister Espitia began studying physical therapy, but she realized she didn’t want to pursue that career path.
To learn more about religious life, Sister Espitia emailed another charismatic religious order, the one she had encountered at 15 years old: the Discípulas de Jesús. “The next day, they responded,” she said.

Forty days later, she went on a vocational retreat with the order, and on that retreat, “I confirmed … that God was calling me to religious life,” she recalled. Sister Espitia made her intentions clear, she was there to see what religious life was like, but not to join the order. The Lord kept calling her, though.

Also during this time, Espitia was having severe back pain — a side effect, she believes, of heavy lifting during her handball tenure — and eventually needed surgery.

“I went through a time of a lot of physical, emotional and spiritual pain … and severe depression,” she said.

That fall, she was on retreat in San Luis Potosí with the Discípulas de Jesús. One rainy, chilly, gray morning, she went on an errand with Sister Margarita Ruiz, who was in charge that year of vocations. Sitting in the parking lot of a store, Sister Ruiz turned to Sister Espitia and asked, “How are you?”

“The surgery was a mistake,” she answered. “They operated badly, and I am in pain.”

Sister Espitia entered the order of the Discípulas de Jesús. She was sent to Texas, where the Discípulas have been invited to share their charism at Sacred Heart Parish in Austin. She currently lives in a convent with two other DJ sisters and spends her days in prayer, in service of her sisters, at daily Mass and teaching religious education classes at the parish.

Sister Espitia still has back pain “almost every day,” she said.

“Our principal spirituality as Discípulas de Jesús is to be women of the cross,” she said. “And the cross isn’t always pain. But the cross is the acceptance of the things God puts in our lives … God has invited me to accept the pain.”

Sitting in her office on the evening of Aug. 3, Sister Espitia held up a metal cross hanging from a chain around her neck. “Every day, before I put on this cross, I kiss it,” she said, “because I say, ‘Lord, the only thing you’ve offered me is the cross.’ It’s the first symbol they give us when we enter the community.” She kissed the cross and smiled.

On the feast of the Assumption of Mary, Sister Lucero Espitia and Guadalupe Guillen, who arrived more recently to the Diocese of Austin, professed their perpetual vows. They wore black veils and white habits marked with a cross. Bishop Joe Vásquez celebrated the Mass and more than 30 sisters and almost a dozen of their religious brothers (Discípulos de Jesus) from Mexico, as well as her parents and many Sacred Heart parishioners attended the celebration.

On the day of her vows, “I was nervous and very excited, but I did have a little pain,” she said.

What changed after the profession? “Everything,” Sister Espitia said.

In an email, she added, “I prostrated myself conscious of my nothingness, and I got to my feet as a bride of Christ forever.” 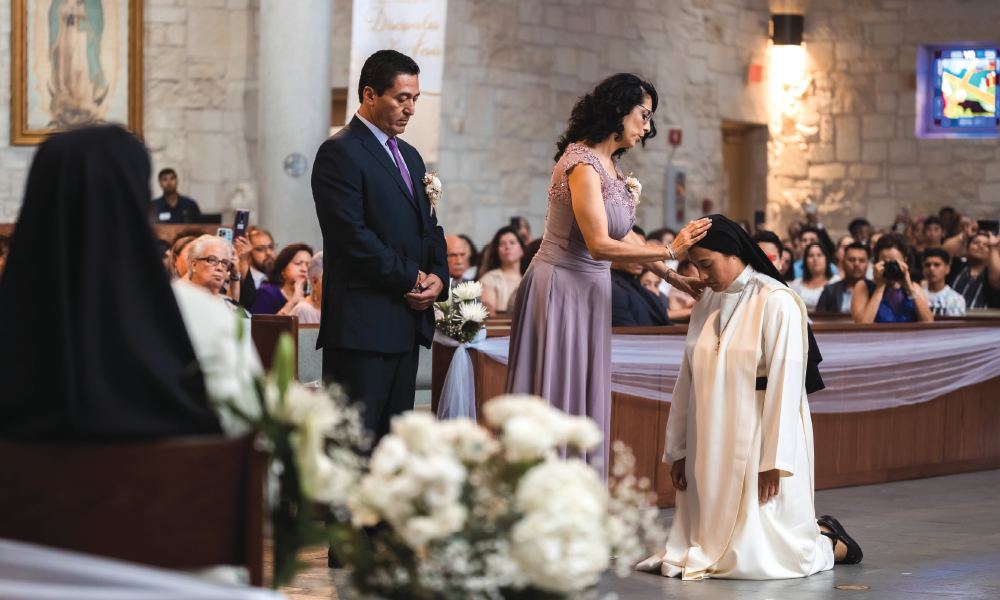 Kiki Hayden has been writing for Catholic publications since 2019. Her writing about vocations, human dignity and empowerment has appeared in publications such as the Blessed Is She blog and the Young Catholic Woman. She married into a Byzantine Catholic family and became Byzantine rite herself; she is a parishioner of St. Basil the Great Parish in Irving.