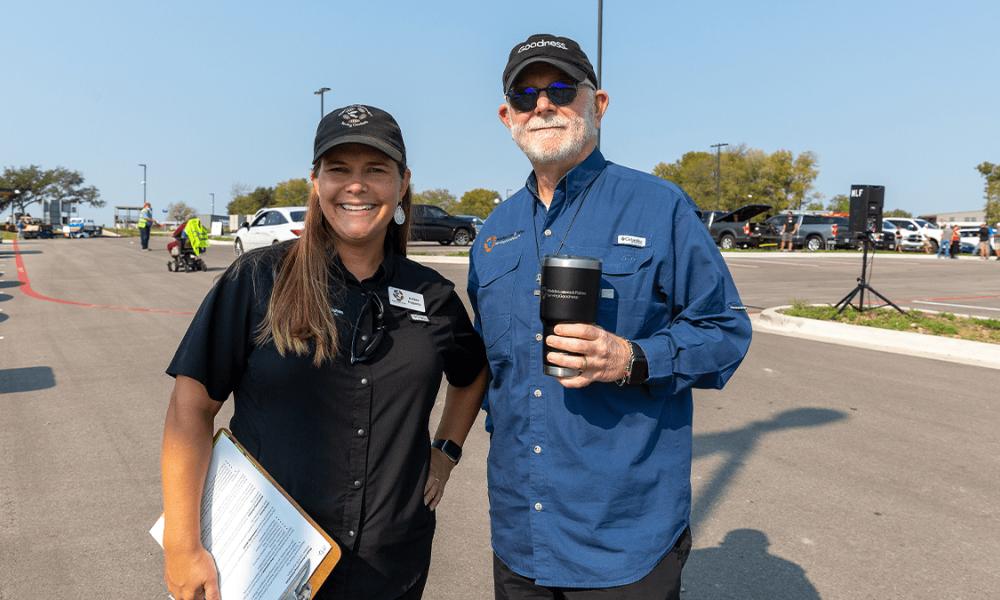 It’s called the red-light dilemma. What to do when a person with a homemade, cardboard sign asking for money approaches your car at an intersection? Two devout Austin Catholics who have dedicated their lives and careers to helping the homeless say, above all, don’t ignore them. Amber Fogarty and Alan Graham say roll down the window, ask their name, acknowledge their humanity.

God will reveal if it is appropriate to give them money. And that gift should be unconditional, they say. Although that person may spend the donation on alcohol or drugs, it’s quite possible he or she may have a family with a sick child waiting nearby. We are not to judge. It’s just as important to open our hearts as it is to open our wallets. We are all God’s children.

MLF operates 12 trucks from eight commissaries based in Catholic churches. The trucks run 365 days a year, delivering food and clothing to folks on the streets and those living in low-income housing. Community First! Village is a collection of tiny homes and RVs on 51 master-planned acres in East Austin dedicated to providing permanent housing to people formerly living on the streets. The Community Works program helps village residents learn new job skills, which provides income opportunities for residents through an array of work programs.

Graham and Fogarty recently shared how their faith has influenced their approach to helping the homeless.

Who would sell their million-dollar home in an affluent Austin suburb and move into a 400-square-foot house to live in a community designed for former homeless people? Alan Graham and wife Tricia did just that in 2019 when they moved to Community First! Village in East Austin.

Considering Graham’s long devotion to providing services to the less fortunate, this is no surprise. Graham, along with four friends bought a catering truck in the 1990s and began delivering food to people living on Austin streets. Out of that humble beginning, MLF has grown exponentially.

A lifelong Catholic, Graham said his attention turned to the homeless in 1998 when he heard about a ministry in Corpus Christi where churches would pool resources to provide services to the homeless.

“At that moment, the image of a catering truck came into my conscious mind as a distribution vehicle from those who have abundance to those that lack,” Graham said.

And like Fogarty, Graham’s Catholic faith has paved the way.

“Virtually all the core values of this organization are word for word out of the catechism. Love your neighbor as yourself, and all members of the human family are equal in dignity. I go back to Mother Teresa and a line that she said, we’re all going to owe a great debt of gratitude to the poor when we get to heaven for having brought us so close to Christ.”

Graham’s oldest daughter, Taylor, serves as community director for MLF. Her first exposure to the homeless came at about age 9 when she tagged along with her father while he delivered sack lunches to those living on Austin streets.

“What’s really beautiful about that happening to me at such a young age is that I was able to meet the homeless and it was never scary for me or intimidating. They were just people. People that needed help. That’s kind of been the mentality that I grew up with,” she said.

Back at Community First! Village, Graham said, “This is the best neighborhood I’ve ever lived in. These are my neighbors, my friends.”

Fogarty: Go to the margins

Armed with three degrees, Amber Fogarty dove into the fast-paced world of the Austin software industry. But something was amiss. Despite her education and job opportunities, she felt unfulfilled. So, Fogarty joined a volunteer corps – Holy Cross Associates – that sent her to Arizona. For one year she worked at Andre House, a renowned program that provides, food, clothing, showers, laundry and more to the Phoenix homeless population.

“The program was based on spirituality, simple living, really diving into what God calls you into do,” Fogarty said. “It was one of the most transformative, powerful times of my life.”

Fogarty returned to Austin after completing her year commitment. But the call to helping the homeless could not be forsaken. For six years, she served on the MLF board of directors. She now works there full-time. All told, she’s spent the last 10 years volunteering or working for MLF.

“I’m just in absolute awe of the gift that it is, to be a part of this ministry, and truly for me I get to live my Catholic faith in such a profound way every day. One of the things about our Catholic faith that I love is the preferential option for the poor. People that have experienced homelessness are my people. I love them. I think they are so wise and so resilient. They have endured so much. They have suffered so much. They have experienced so much drama. We have much to learn from them,” Fogarty said. “Jesus sought people that were outcasts, lost and forgotten. And that’s what I think he wants us to do. He wants us to go to the margins.”

Bishop Bill Wack of the Pensacola-Tallahassee Diocese met Fogarty during those formative years at Andre House. He later reconnected in Austin at St. Ignatius Martyr Parish where he was pastor. He said it’s uplifting to witness Fogarty’s devotion to the homeless blossom through her Catholic faith.

“Amber had this growth. It’s neat to see how the more she gets involved, the more she wants to do and the more she sees there is a need,” Bishop Wack said. “She’s very passionate about social justice and fairness. That’s a big motivation for her as well.”

Fogarty met her husband, Martin, in Phoenix while working at Andre House. They have been married 16 years, live in Austin and have two children who attend Catholic schools.

The village is also looking for missionals, residents who have not experienced chronic homelessness themselves, but have been called by God to serve the men and women who live in the village.