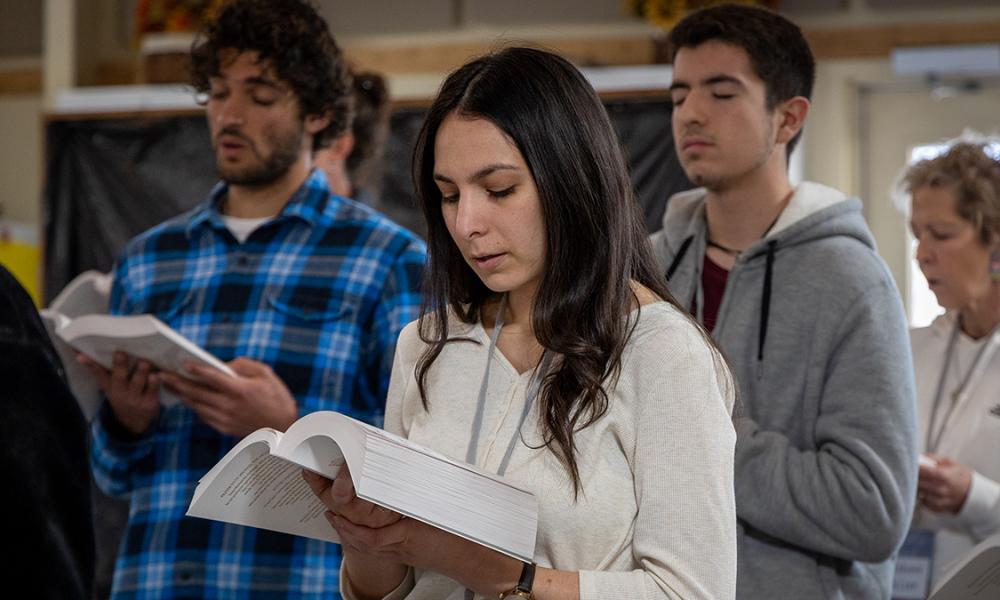 During March, 30 young adults participated in the Father’s Heart Silent Retreat at Eagle’s Wings Retreat Center in Burnet. Father Jonathan Raia, chaplain at the University Catholic Center, led the five-day retreat, which was based on the Spiritual Exercises of St. Ignatius of Loyola. Nine spiritual directors, including five priests and four lay women, were also present.

Pete Rochat, a student at the Dell Medical School at the University of Texas, intended to slow down and spend some quality time with the Lord when he signed up for the retreat earlier this year. However, it seemed God had other plans.

“He wanted me to heal. There was one wound that I had buried deep … God let me know that he desired to heal me from this wound. I reluctantly but trustingly followed his lead,” Rochat said.

Through silence, tears, prayer, adoration, confession, Mass and spiritual direction, he slowly opened his heart to the Lord, he said.

“In the silence of our hearts the Lord speaks. I cannot imagine how the Lord would have incorporated these graces into my life had I not given him the opportunity on this silent retreat,” Rochat said.

Katherine Castaneda, a FOCUS Missionary who works at the University Catholic Center in Austin, said the extended periods of silence and prayer allowed Jesus to penetrate the walls she had established between Jesus and herself.

“The five days out of the city and out of my day-to-day life were so restful and fruitful. God really gave me the grace to only think of him and contemplate his glory and beauty,” she said.

This was the fourth consecutive year that Kristen Gammel, a spiritual director from Waco, gave of her time to help young adults journey deeper into their relationship with Christ.

“Every year I am in awe of the miracles and healing we witness and receive, as grace and nature work together. These young people bring light and hope to the world through their witness and desires,” Gammel said.

Elizabeth Lagoe McAlonan, the diocesan coordinator of Young Adult Ministry, said this is the fourth year the diocese has offered the retreat during Spring Break.

“As the organizer of this retreat my goal is to provide young adults with an opportunity to step away from the busyness and chaos of life for a few days to genuinely seek the Lord. We know that God speaks in silence, and it is amazing to see year after year how powerfully God works in the hearts of the young people who attend this retreat,” she said.

For more information about young adult activities, contact McAlonan at (512) 949-2468 or
elizabeth-lagoe@austindiocese.org.