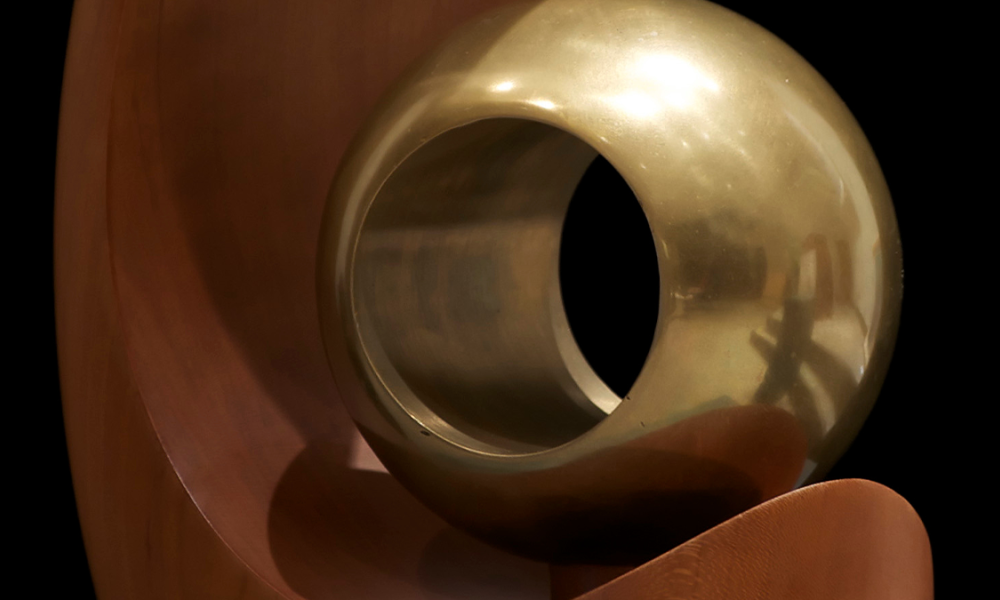 Sacred Art Leads Us Through the Mysteries of Our Faith

Study the accompanying photograph of an abstract work of art for a short time.

What, if anything, does it say to you? Do you see any significance in the objects, in their shapes or in the connection between the objects? Sometimes we get a sense of what art is trying to say, without being able to say exactly.

What if I told you this sculpture is about a human relationship? Now look again.

The title is “Madonna and Child.” The cherry wood “mother” cradles the bronze “child” in a lower curve that is concentric with the diameter of the bronze, depicting interdependence, connection and harmony.
The curve of the mother’s lap gradually changes to an ellipse, which creates a protective and sheltering attitude but can also be seen as providing an eventual “launch angle” for when the child leaves home.

The nature of the polished bronze child is to reflect its environment. The gold color represents its preciousness. The hole in the child can connote two things – a capacity for growth, learning and love and it can symbolize the God center that is in all of us, but can only be hinted at and not accurately depicted. In “The Unknown Craftsman,” Soetsu Yanagi wrote “It is what is not there that gives a bowl its meaning.” Indeed, it is that God center that gives each of us our true meaning.

There is a common misconception that abstract art is often meaningless and devoid of any spirituality. It can be, but if we think of it as a different imagery language, that it uses one thing to represent another thing, then we open ourselves to more varied pictorial expressions. The sacred art used in Catholic churches is overwhelmingly figurative and representational, but interestingly, it is also heavily symbolic, allegorical and abstract. It draws us beyond that representation and into what cannot actually be represented – God, the communion of saints, Heaven, holiness, virtue, etc. If we stop at the external reality depicted, without recognizing the level of existence beyond it, we have truly missed the point. Then we believe the Infinite refuses to be expressed in the finite, whereas the opposite is true. Where else will it be expressed?

In the RCIA process, the fourth stage is called “Mystagogy” from Greek words meaning “to lead through the mysteries.” The sacred art in churches as well as the architecture itself has been and should be selected because of the mysteries that can only be envisioned through signs, symbols, iconography, decoration, ornament and our rites themselves.

In Pope Emeritus Benedict XVI’s apostolic exhortation “Sacramentum Caritatis” he pleads for mystagogical catechesis, saying, “This is particularly important in a highly technological age like our own, which risks losing the ability to appreciate signs and symbols.” How many of us know what the symbolism is behind the use of palms, flowers, gourds, angels, pelicans, pomegranates, beastly gargoyles, doves, wheat, grapes, scrolls, cross, crown, fish, daisy, lily of the valley, Chi-Rho, circle, anchor cross, triangle, lamb, crown of thorns, candle, bread and wine, rainbow, Alpha and Omega, a phoenix, almonds, man-lion-ox-eagle symbols and the colors white, red, purple, black and green?