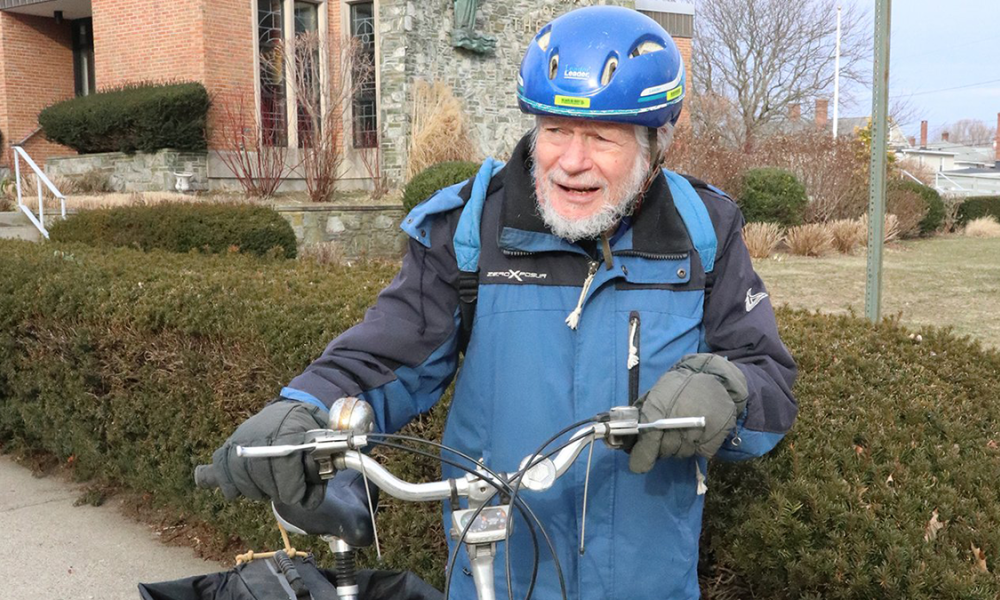 Priest, 79, Braves Cold to Make Pilgrimage of Prayer for Ukraine by Bike

As Ukraine faces a fierce challenge to its young democracy from more than 120,000 Russian forces stacked on its borders, poised to invade at any time, a Rhode Island priest is showing solidarity with the plight of the people of the overwhelmingly Orthodox Christian nation.

“Russia is surrounding the Ukraine with troops. What else can I do but pray?” said Father Thomas O’Neill, 79, a senior priest of the Diocese of Providence.

Father O’Neill embarked on a pilgrimage of prayer on a morning where the mercury hovered at 15 degrees as he rode his bicycle from his home in Middletown to St. Patrick Church in Providence in late January.

He stopped at churches along the way to offer prayers for peace in the region.

A well-read student of history, who spent 20 years of his ministry serving outside the United States, Father O’Neill fears what will happen to the Ukrainian people if Russian President Vladimir Putin directs the vast array of forces he has amassed on three sides of Europe’s second largest nation by area to invade Ukraine.

During a stop at St. Mary of the Bay Church in Warren, Father O’Neill recounted how, during the era of Soviet leader Josef Stalin, millions of Ukrainians starved to death.

The brutal dictator caused a famine by ordering Ukraine’s small farms to operate as a collective, usurping their harvests to feed those living in Russia. Stalin’s goal was also to punish Ukrainians whose dreams for independence would threaten his total authority.

“During the Stalin era, they were starved to death because they took all the food out of the Ukraine that was grown on the collective farms and the peasants all starved, millions and millions of them. Why would Ukraine want to have anything to do with Russia now?” the priest asked.

“They’ve got a lot of reasons not to want to be hinged to Russia,” he added in an interview with the Rhode Island Catholic, Providence’s diocesan newspaper.

Ukraine gained its independence in 1991 following the collapse of the Berlin Wall and the ensuing dissolution of the former Soviet Union. It has been operating as a democracy since then.

In recent weeks, Putin has been deploying tens of thousands of well-armed troops to Ukraine’s borders, threatening the East European nation of 41 million as he publicly lamented its desire to join the West’s NATO security alliance.

“Putin cut his teeth on the KBG. All he knows how to do is smile, be friendly, lie, murder and torture,” Father O’Neill said of the Russian leader who has his sights set on continuing to regain lost ground in Ukraine.

In February 2014, during the Winter Olympics, which were held in Sochi, in southern Russia, Putin invaded Ukraine’s Crimean Peninsula after the nation’s Parliament ousted its pro-Russian leader, Viktor Yanukovych. They have held that piece of Ukraine ever since.

Father O’Neill said he has been astounded to see some American television hosts actually make the case that the U.S. should be supporting Russia over Ukraine on this issue given that Russia has more to offer this country, given its resources, than Ukraine does.

He expresses his solidarity with the Ukrainian people, noting it is not just geopolitics at work but Catholic social teaching as well.

“If you read ‘The Church in the Modern World,’ or any of the documents the Catholic Church has produced on social justice you’ll see that what Putin is doing is not just the opposite – it’s the extreme opposite,” the priest said.

The Pastoral Constitution on the Church in the Modern World (“Gaudium et Spes”), issued in 1965, is one of the four constitutions resulting from the Second Vatican Council.

As the morning sunlight streamed through the stained glass windows of St. Mary of the Bay Church, Father O’Neill offered prayers for the people of Ukraine before heading back out into the biting cold to climb aboard the old Raleigh mountain bike that would take him the remaining 14 miles or so to St. Patrick Church in Providence.

The bicycle was given to him by a former parishioner when he served as pastor of St. Mary Church in West Warwick, until he retired nine years ago.