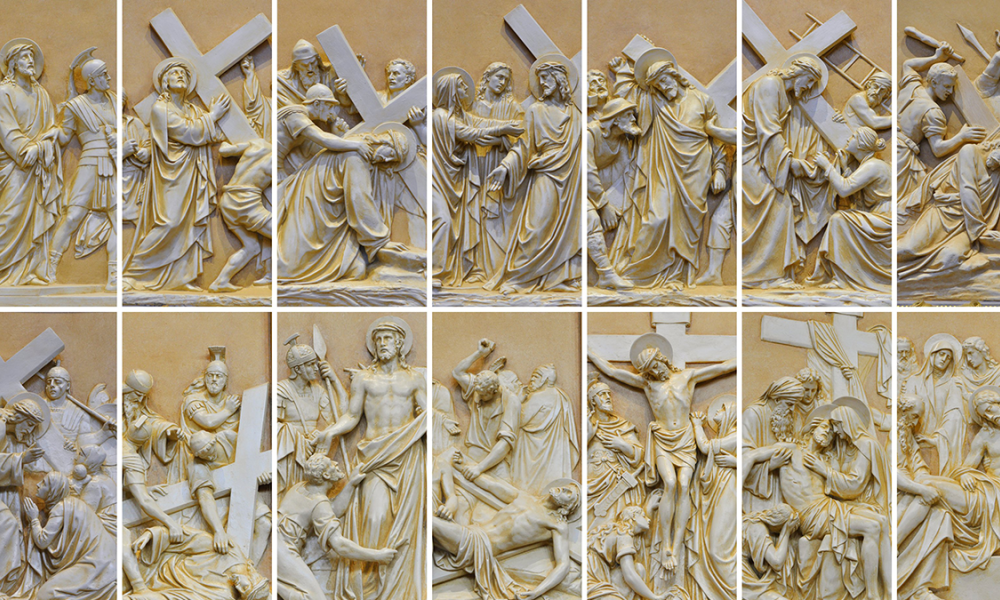 From partaking in the sacrament of reconciliation to fasting to choosing what to give up, Lent is full of traditions that Catholics around the world take part in as they prepare to celebrate Christ’s passion, death and resurrection.

But there’s another sacred tradition that dates back to the early days of the Crusades; one that allows them to “walk” the Via Dolorosa with Christ: the Stations of the Cross.

The Stations of the Cross are a mini-pilgrimage, taking believers through the steps taken by Jesus on Good Friday, from his condemnation to his burial.
The stations are a “way of prayerfully uniting oneself to the sacrifice of the Lord and his love for us,” said Father Eric Fowlkes, pastor of the Cathedral of the Incarnation in Nashville. “It’s also an invitation for us to place ourselves within that journey.”

The Stations of the Cross date back to the Middle Ages during the religious wars between Christians and Muslims, known as the Crusades.

“The Crusades awakened an interest in Europe in the places associated with Christ in the Holy Land. For the first time, Europeans were traveling there regularly and wanted to see the holy places where the biblical events took place,” said Father Bede Price, pastor of Church of the Assumption in Nashville.

“One of those was, of course, the Via Dolorosa, which is the path that Christ took to Calvary, and there were certain spots along that path where things were said to have happened,” he told the Tennessee Register, the newspaper of the Diocese of Nashville.

“The most famous one probably is Veronica” wiping the face of Christ, he continued. “That’s not in the Bible. It’s a legend, a story about a woman who had compassion (for) Christ and wiped his face with a veil.

“The word ‘Veronica’ simply means ‘a true icon’ and even that is tied to the Crusades because the legend of Veronica becomes part of the story of the Shroud of Turin. … These things are all part of the traditions that have been handed down” throughout the history of the church.

But trips to the Holy Land weren’t easy ones to take for everyone in Europe, so “people started erecting these stations in churches in Europe so they can virtually go on a pilgrimage to the Via Dolorosa,” Father Price said. “That’s where the devotion began.”
The devotion was further popularized by St. Francis of Assisi, Father Price said. And his version is just one of many that can be used for meditation today.

Since its origins, several versions of the Stations of the Cross have been developed, and while in communal celebrations each church designates which version is used, believers have options for which version to use when praying them alone.

“It’s a matter of preference and there are a variety of wonderful resources with different options for the Stations of the Cross,” Father Fowlkes said. “It’s about discovering the one that speaks to your heart.”

Each, at their core, has the potential for deep reflection and lessons.

From new forms of meditation to inspiration for everyday life to connecting personally with a particular station, the priests agreed there are many lessons to be learned from the stations.

They are similar “to the rosary in so far as you are saying the prayers, but you’re also supposed to be meditating on the mysteries. In the same way, we also meditate on the mysteries of the Stations of the Cross, and each one of them has a lesson for us,” Father Price said.

“St. Veronica for instance would be a lesson for us to meditate on compassion, to suffer with, which is what the word compassion means,” he said. “Do we suffer with Christ when we encounter our own difficult things?”

Veronica also provides insight into how we interact with others, said Father John O’Neill, who is pastor of three Tennessee churches – Holy Trinity in Hohenwald, Christ the Redeemer in Centerville and St. Cecilia in Waynesboro.

“We must be kind, we must be responsive and ready to receive and to give,” Father O’Neill said. It’s also a reminder that “God will always send somebody in the middle of the crowd that you never saw before,” he added.

The stations also are reminders of the perfect example of Christ and the depth of his love.
“Myself, I always wonder, ‘Why did he fall three times?’ That’s a meditation because whenever numbers come up in the Catholic Church, they mean something,” Father Price said. “Three is a number which means perfection, so I think what it’s trying to say is Christ is the perfect penitent, the perfect model of penance in those three falls.”

“I love that Jesus falls three times,” Father O’Neill added. With each, “he falls for us.”

Father Fowlkes said there is always something new to be revealed in our personal faith journey each time we participate in the stations.

“At different points in our lives, if we are spiritually attentive, we are going to connect to different parts of the message of the stations,” he continued, pointing to the Fifth Station: Simon helps Jesus carry the cross.

“There will be times in life when we are grateful that someone is helping us carry our crosses, and there are other times when we have the opportunity to help people bear the burdens of their cross in life,” Father Fowlkes said. “In that, it becomes more than just about something in history, but it becomes something that is alive in our faith.”